“Pour Over”is one of the coffee brewing method.
Though they all fall under the same method, but there are two kinds of pour over method; that is,
“Osmotic-flow” and “Full immersion”.

What is Osmotic Pressure?

Pour Over Brewing by Osmotic-Flow method

“Blooming” is the process to gather coffee essence in spaces between coffee powders by pouring water on coffee grounds. In the spaces before pouring water filled with gas, but the gas is pushed out by poured water. The gas is light so it comes up then the grounds are lifted up and expand fully. This time, water flows in the spaces instead of the gas.

Here, thanks to osmotic pressure, coffee essence is seeped out in water then stay in the spaces.

Osmotic-flow is the brewing method to occur osmotic pressure by letting water pass through the filtering layer continuously.
For the reason, in case you pour water in a large amounts at one time over coffee grounds, then water is stayed and the filtering layer is destroyed. Just at this moment, it is no more “osmotic-flow” even if you use a dripper for the osmotic-flow brewing.

Blooming is for what?

“Blooming” can be said to be the preparation for brewing.

What happen if water is poured continuously?
- It causes what we call “uneven extraction” .

Water is not circulated by convection inside dripper, then the first water path becomes the easiest path for water to flow. Because of this, many components of coffee are brought out around the first water path but less from the other coffee grounds. Continuous water pouring causes uneven extraction.

Water pouring for blooming, it is better to imagine just putting water on the surface rather than pouring water. To draw a circle slowly from center to outside; never pour water around the border. 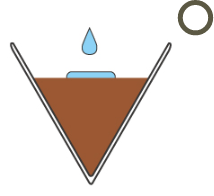 Water spreads evenly over coffee grounds, and the coffee powder swells like a dome.
Several drops of coffee liquid brewed out from the bottom are ideal. 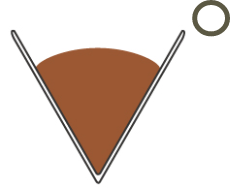 When water is poured around the border between coffee powder and paper, water is oozed out from the side, not from the bottom. It results in uneven blooming; it can be said same as the case of too much water pouring. 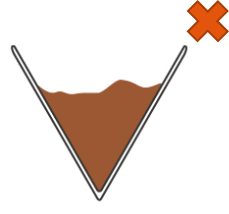 How to Pour Water

The coffee powders in a paper filter play the role of filtering.

The round hole at the center is the mark to show that you get a good taste of coffee!!